To write is to struggle. You know this, or at least, you sense it, though to write you have to ignore it often.

The struggle is endemic, so common it’s hardly worth mentioning. And yet, people who don’t write have no idea, no frame or context for this. And so we often wonder why it’s so hard and if it’s only us, and we don’t admit our deep unrest.

Madeline L’Engle famously said, “If you want to write, you need to keep an honest, unpublishable journal that nobody reads, nobody but you.” It’s good advice–you need to be in conversation, in relationship, with your work and your process, and that does need to become a personal, private, and protected connection for you. I think this is easy to understand for Christians who already know the source of inspiration, and the struggle to remain connected with Him.

Like talking about an invisible savior who lives and interacts with us in our hearts and minds, it can sound mmm, a bit “cra-cray.” Writing is an invisible friend of the seemingly crazy and capricious variety, like Bing-Bong in Inside Out. 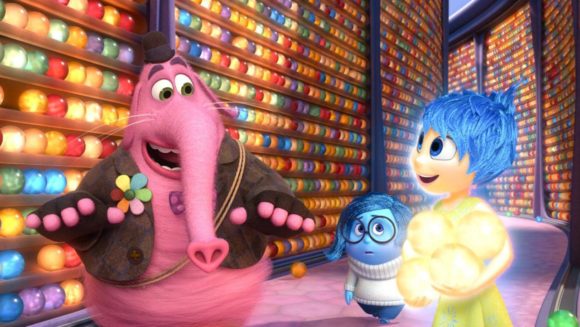 Maybe this is a reason so many people love Bing-Bong (and Jesus): we all know deep down our lives depend on friends we have to use our imagination to see and get to know.

Of course, no one wants to make too big a deal about this. After all, there’s the very real, corporeal world we have to contend with as adults, and everyone has to grow up and let their imaginary friend die at some point. Right?

Well, writer, Christian writer, what can I tell you? You’re special.

People aren’t going to respect the fact that you keep a little notebook to write down all the crazy you hear between the lines of conversation at the grocery store. Normal people–let’s call them “muggles,” even though most are harmless and not like the Dursleys…

They don’t care so much about yours; they just have other jobs and callings. And it’s a very good thing too, since we have to live and get our plumbing fixed and find exterminators and things.

In my experience, writers all seem to get this difference fairly intuitively, maybe because this relationship with invisible people started a long time ago for them. We all met a character in a book at some point who was so real, it couldn’t just be the creation of a writer. But it was. And writers beget writers this way all the time.

Until we realize that it isn’t writing that makes us cranky and crazy, or even the muggles, but our own internalized perfectionism and that voice of fear we all hear, we’re prone to the debasing dismissals we tend to get from “the real world:” What have you published? Aren’t you finished yet? Why would you write that?

Again, they don’t know what they’re doing and don’t mean anything by it (you’re not actually doing anything useful, after all). But they can inadvertently stoke the flames of those hellish fears we all have. But while we’re still breathing, we have to learn to sidestep and dismiss these distracting, irrelevant, unhelpful “real-life” concerns.

Self-doubt is poison to your system.  It’s universal and all authors, even famous, multi-published writers feel it. But the successfully productive ones also deal with it and have learned how to sidestep and disarm it. You don’t get to complete your mission until you learn how to do this.

Step one is to value your process and understand it’s a vulnerable relationship, just like every other meaningful relationship in your life. This is a primary relationship you have to show up to cultivate every day, no matter what other considerations or responsibilities you have.

Step two is to feel what you feel, but deal honestly with it and don’t let it derail you. Express it to a fellow writer or group of writers and don’t try to go it alone. Writing friends are essential.  Know it’s normal, and you aren’t strange for having an invisible, intangible, ephemeral “friend” who helps you and inspires your life.

And step three is to keep showing up every day. Just do what you can manage right now and let it be enough. A great book can start with 5 minutes a day and grow from there. But only a writer who knew it took dedicated time, and learning to say “no” to many other worthy pursuits is able to make the practice of a process their priority.

Pomodoros can make you more productive. And strategy and planning can keep you producing, because this is all about doing it and not just talking or thinking about it. But in the end, knowing you’re not alone in your imaginary world can calm the voices of fear and that’s what can convince you it’s worth the time and sacrifices to commit.

In fact, everyone has an imagination, so everyone knows what it’s like to hear these voices. Writers are just those who’ve made it their business to face them and choose the right ones to listen to.

And that’s a specific understanding and skill you can enjoy for a lifetime. :)

7 thoughts on “All Writers Be Crazy: Some Thoughts on Why”